I recently spotted an advert on the UK Full-Bore forum for something slightly different to the rifles we usually go for, a Remington Nylon 66. Now if you are reading this from the USA you will know exactly what the Nylon 66 is, however if you are here in the UK and not a follower of older .22 Rimfire semi-autos the 66 might be something you have not come across.

The Nylon 66, named after the material it was built from came about when Remington was owned by DuPont. In the early 50s Remington broached the idea of building a low cost firearm with a synthetic material, DuPont offered Nylon Zytel-101 as a solution and the Range of Remington Nylon rifles were born. The rifle was greeted with some suspicion in the pre ‘Synthetic stock’ days of rifles however tests showed the rifle to be rather successful and certainly durable and the rest, as they say, is history.

The 66 weighed in at 1,8Kgs/4 lbs, had a 14 round butt fed tubular magazine, chambered for .22LR and was produced between 1959 and 1989 and during this period over one million units in different variants were produced. 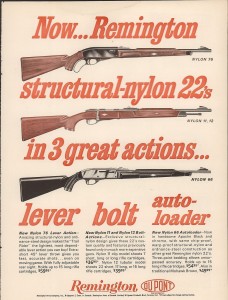 In addition Remington produced Under-lever and Bolt action versions to cover all tastes. All of which appear to have a very strong and loyal following.

Anyway back to the rifle I spotted, it was fitted with a silencer which is quite a common occurrence for .22 rimfire semi-automatics here in the UK which did mean it had been screw cut and as such was non standard, also it looks like the very front of the forend has been shortened very slightly however I cannot confirm this. Finally it was in Glasgow, Scotland which is virtually a different time zone to us however it has caught my eye and I had to see if I could get hold of it.

As luck had it I knew an RFD who was heading up to see the seller to view a different rifle so I contacted him and asked him to take a look at the 66 and make a call on it. The message came back a couple of days later confirming I was going to be the proud owner of a Remington Nylon 66.

OK so now you are going to ask why on earth I should want such a firearm, my interest/passion for all things over 1000 yards is well documented and lets face it, a .22 rimfire semi is hardly the sort of thing we usually shoot however I had my reasons. The Viking (Wife) seems to have a thing for under-lever Marlins and I equally wanted to own something for shorter distances. On top of this I have a thing for older and more obscure .22s and I seem to see a few come into the workshop for various fixes and tweaks and I quite like the things so why not own the odd one or two or…

Finally, we have recently moved to the Lincolnshire Wolds (The Hilly part of Lincolnshire) and we have a fairly local gallery range so what better to shoot than a .22LR.

Anyway here is the Remington finished in what looks to be like Mohawk Brown with a serial that places it in the late 1960s, I am yet to shoot it however the RFD who picked it up tells me:

Put 80 rnds of Hi Vel American Eagle through it this morning, once I’d got the scope sighted the next 20 rnds knocked the middle out of the ten ring at 25yrds.

Had two stoppages failures to feed, suspect this is nothing that a good clean won’t cure.

So good news and to be honest I had hoped for nothing less.

Apparently the Remington Nylon 66 has been to put to use in all sorts of scenarios and being predominantly Nylon which is thermally stable and self lubricating it has seen use in Alaska and Canada in some extremes of temperature and interestingly was also allegedly used by American special forces in both Vietnam and Cambodia. This application caught my eye for a variety of reasons. The first being the use of what is probably a Sionics suppressor, I have worked on a variety of suppressor designs in the past and my Accuracy International sports a very effective prototype reflex suppressor and is used routinely to 1200 yards with supersonic ammunition. This version of the Nylon 66 featured what looks to be a 13″X1-3/8″ diameter can, along with a lock on the right hand side to prevent the rifle cycling the next round, this would mean no noisy escaping gasses or rattle of bolt.

Given the slightly non standard state of my rifle it is certainly food for thought.