This is an important subject so I am going to labour over it somewhat and you have some pictures to refer to if you ever feel the need to disable a Ross M1910 MkIII rifle bolt or indeed need to confirm if it is correctly assembled or not.

OK, so those of you who are not familiar with the Ross rifle are probably wondering what it is and wondering what is so important about it’s bolt assembly. Well, the Ross rifle was initially standard issue to the Canadian Army during the Great War. Designed by Sir Charles Ross the rifle was a straight-pull rotating bolt lug design and was first accepted by the Canadian Army in 1903 where he was successful in achieving an initial order for 12,000 units.

The operation of the bolt is based upon an internal screw that rotates the bolt head and locking lugs into battery counter clockwise (Viewed from rear) Being of straight pull operation the bolt is simply pulled back to eject the fired case. Downsides included primary extraction and the design was prone to jamming up in dusty or muddy conditions. On a plus side the Ross rifles had a reputation for good accuracy and fine tolerances. There was also a more alarming potential issue.

OK, back to the bolt, surely if it is wrong it will not go together correctly or will not operate? Well this is often the case with many rifle bolts however the Ross MkIII can be assembled incorrectly, appear to go into battery and operate in that the sear will drop, the firing will move forward and strike the primer and you know the rest, apart from the bolt although forward does not have it’s lugs engaged and can and will be blown back under the pressure of the cartridge ignition.

Legend has it the bolt will fly back, smash the bolt release catch and strike the shooter with extreme consequences, this is documented to the extent that the Canadian soldiers who were issued a Ross rifle would drop the Ross and grab an SMLE at the first opportunity.

The Canadian Army eventually adopted the SMLE No1 Mk3 and all was good again.

Lets take a closer look at the bolt itself. This article is about the M1910 MkIII and the first thing you need to know is do you have a MkIII in your hands. Well if it has an external magazine then it is almost certainly a MkIII, the downside is just because there is no apparent external magazine does not mean it is not a MkIII so keep reading.

Removal is simple enough, the bolt release catch is located to the left hand side of the rear sight bracket and is rotated down 90 degrees to allow the bolt to be removed. 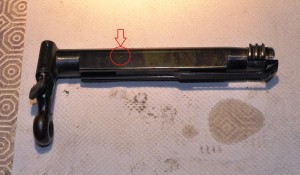 Now take a good look at the bolt, this is the first check to see if you have an original M1910 MkIII bolt that has not been modified to prevent incorrect reassembly. The red circle with an arrow pointing to it in this picture shows where the retrofitted stud/pin should be, if you can see a flush stud in this area then your rifle has been modified to prevent incorrect assembly. This particular Ross has been sporterised and now has some colour case hardening on the bolt body, it is also missing the stud so it has the potential to bite.

Stripping the bolt is as follows.

Now we need to strip the bolt, take a look at the back of the bolt and you will see the cocking piece and the rear of the firing pin protruding out from it, the firing pin has a small hole in it and this allows you to push something through it to pull the firing pin and cocking piece back, I have a natty little tool which has a T bar at one end and a 90 degree hook at the other end that allows the cocking piece to be pulled back with ease. Downside is it was not on the bench, or in the rack or on the shelf or anywhere to be seen so I used a small T Handled Hex Key instead.

As you pull everything back with your T handled hex/piece of wire/something pointy you will notice a cross pin, hold the bolt body in your left hand, the cocking piece in your right and push the cross pin out, it comes out with ease assuming you have a third hand, alternatively you can use a suitable punch facing up in a vice and push down on the punch with the whole assembly to remove the cross pin or find yourself a Viking at hand who will tap the pin out. Keep an eye on where it goes…

Slide the cocking piece off the firing pin and you can now unscrew the bolt inner tube from the outer body by rotating out.

Finally you need to unscrew the retaining screw from the rear of the bolt inner tube, take care this is under tension from the firing pin. You could use some needle pointed pliers however if you have an SMLE firing pin removal tool it can be used and albeit not a perfect fit it works adequately. At this point I would suggest making yourself a dedicated tool if you plan on stripping Ross bolts down on a weekly basis. 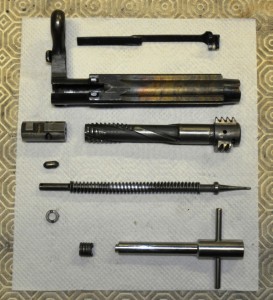 Beware, sitting under the retaining screw is a small anti rotation plate that is easily lost so keep an eye on it. You can now remove the firing pin and spring and you should end up with something a bit like this picture.

You can now take your time to clean and inspect the individual components, cleaning is important because whilst you are cleaning you are looking and this is the time to discover any potential issues.

Once everything has been cleaned and inspected it can be reassembled by reversing the procedure.

STOP!!! This is where you really need to pay attention to a couple of areas if you wish to grow old disgracefully.

Starting with the firing pin, lightly oil it if you wish, replace the spring and slide the assembly in 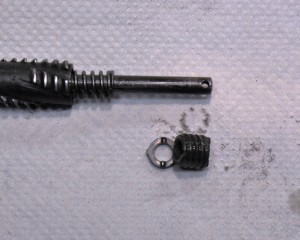 the rear of the inner tube, it will need to be locked in place and to do this slide the anti rotation plate down the firing pin paying attention to it’s orientation, on one side are two small protrusions which engage with two grooves in the retaining screw. The anti rotation plate has a small protrusion on the outer edge which engages into a groove in the inside of the inner tube. Take a close look and you will see what I mean.

Use your SMLE tool or whatever to screw the retaining screw into the body and make sure it finishes aligned with the anti rotation plate and flush or just below the surface of the inner tube assembly.

Time to put the inner tube into the bolt body. This reminds me of timing the safety on the SMLE, it is either right first time or you end having a few goes, I can usually get the SMLE safety right first time. This particular Ross bolt took a dozen attempts to get it correctly timed which means every time I failed to time it correctly it would still have gone together and appear to be correct, in fact it would function as normal other than it would probably kill the shooter. The correct orientation of the rotating bolt head is as per the first image in this article, see how the lugs face up and down and you can see three ‘Teeth’. This is the correct orientation.

Once you are happy that the bolt inner tube is correctly timed to the body it is time to fit the cocking piece, slide it over the rear of the firing pin, now insert something suitable into the hole in 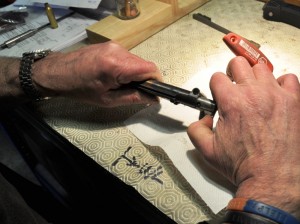 Finally refit the extractor claw by sliding it into the groove in the bolt body and pinging it over the bolt head and into the bolt head groove, use you fingers as you have more feeling and are less likely to snap the claw off. You can now replace the bolt into the receiver.

Time for one final check. You will need to rotate the bolt head by 90 degrees in order to enable it to slide in the raceway on the receiver, as you do this the bolt inner tube will rotate forwards and when fitted in the rifle you should see a gap between the bolt body and the bolt head shown in the areas circled in red below. If you do not have a bolt that looks like this something is very wrong and you need to strip and re-time the bolt.

There is one final check to make. As the bolt engages into the counter lugs it will start to rotate up, anti clockwise as viewed from the rear, with some care you can see this happen and it is a good final check to confirm correct operation.

All that is left now is to get it down the range and shoot it as all rifles are designed to do.

Enjoy however do take care as well please,