I am slowly becoming a fan of what my wife would describe as ‘Pre Titanic rifles’  So anything designed and built prior to the Great War is of interest so this particular example of a G88/05 Loewe of Berlin model built in 1891 with a very low serial number immediately caught my eye despite it’s rather tired appearance.

I removed it from the rack, checked clear and cycled the bolt a few times savouring it’s slick and precise action. These rifles are often erroneously referred to as the Mauser 88 however Mauser did not design, nor manufacture this rifle however there was a carbine version, the Karabiner 88 for mounted troops which can and is shortened to K88 which sounds rather similar to K98 hence the possible confusion. As well as the full length Infanterie Gewehr Model 1888 and the Karabiner 88 there was also the Gewehr91 for use by the Artillery.

So if not a Mauser who did design it? The German Rifle Commission who also designed the Patrone 88 or M/88 Cartridge and at this point it is important to understand that although this is the forerunner to the 7,92×57 cartridge there are some subtle yet incredibly important differences. The original M/88 had a heavy 8.08 mm (0.318 in) diameter bullet whereas the later variant released in 1905 has an 8,20mm diameter bullet and is referred to as the ‘S Patrone’ (Patrone is German for cartridge) So loading an original G88 or indeed anything chambered for the Patrone 88 with the more modern and larger bullet diameter ammunition is probably going to end badly and it does not end there, even if a rifle of this age is stamped with an S for the more modern cartridge I would still advise against using modern high pressure ammunition in a 110 year old rifle.

With this in mind I scanned the receiver for any indication of the type of cartridge used and spotted a neat ‘S’ stamped above Loewe Berlin on the receiver. The receiver also has a thumb indent on the left hand side and had the stripper clip slots machined in so this rifle had been modified around 1905 to become a Gew88/05. Things were looking good and it also appeared to bear a fairly recent Proof mark on the barrel shroud. I would need my reading glasses for this bit, hmmm… 8,9mm x 2.244″ Smooth bore – Arghhh! Why on earth has this rifle been smooth bored, well probably because the bore was shot out.

Bugger I thought, a beautiful rifle that was now no longer fit for man nor beast and certainly of no interest to me, yet I heard myself asking.

OK so more than a tenner however pleasantly less than a ‘One-er’ and I am very happy with my latest acquisition.

So what now? Well the proof house has stamped the barrel shroud so a replacement shroud would be handy and luckily they are readily available at very sensible prices. Next a barrel blank and what is more fitting than a modern Lothar Walther steel barrel correctly chambered for the later S Patrone in keeping with the receiver stamp however even then I would be inclined to shoot it with a reduced load. Whilst on this subject do remember that is it perfectly acceptable to have a rifle Proofed here in the UK for a specific cartridge and load. 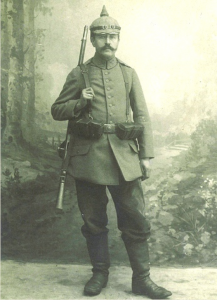 What about the history of this particular rifle? Well a good indication are the stamps on the barrel bands and this one has:

I will need to drop the barrelled action out of the stock and remove the barrel shroud to see if I can find any further markings to tie up this rifle’s history further and who knows, it might even have been carried by someone like the chap in this picture.