I decided to take a few minutes out to give the little Remington Nylon 66 a clean up after Friday night’s outing, it looked a bit rough when I peered into the ejector port however it had also shot well so should I be spending time on it, well yes actually I should. My rifles are used to shoot with and I want them to function reliably and correctly plus I always prefer to give new acquisitions the once over so I set to work stripping it down for inspection.

The Nylon 66 is well documented and field stripping is incredibly easy, make sure the rifle is unloaded, cock it and move the safety catch to safe. Remove the cocking handle and take a flat bladed screwdriver, or a coin and unscrew the two receiver cover screws, now lift the receiver cover off, and all is revealed. Arghh….. 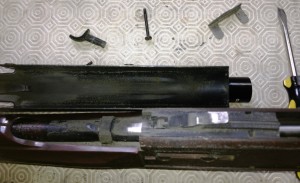 What looked like 25 years worth of crud, carbon, grit and sand, it was as gummed up a semi-auto rimfire as I have ever come across and it really does bring home just how good these little things are. Forget about the plastic side of things, I have seen 10/22’s fail in a lot better condition than this 66.

Time to go a bit further. The barrel is removed by slackening off the barrel retaining clamp and sliding the barrel out. The bolt, guide and spring can now be removed as can the firing pin striker, guide and spring and that is about it as far as a field strip goes. Tools required, well a flat bladed screwdriver, a coin or the back of a knife blade is about a much as you need and allow 3-4 minutes tops.

Taking things a bit further I can safely say you can strip this rifle to virtually every single part with not much more tool wise, a bent paper clip is handy for one of the springs and you may need some pointed nose pliers and something to push the pins put however, for the most it is an incredibly easy rifle to strip although you do need to pay attention if this is the first time. The Remington Nylon 66 can be stripped on a kitchen table with only the items in the cutlery draw, or on a sleeping bag with a multi-tool, just keep the parts you remove somewhere safe until they have been cleaned and reassembled.

I did say things were a bit grim inside and it took a while to clean everything, I used kitchen towel, cotton buds, lighter fluid and an AR15 type brush for the really tough parts and made sure to clean and dry every single part so there was no trace of residue, one of the things to remember with the Nylon 66 is it is run clean and dry with no lubricants and I was pleasantly surprised with the way things cleaned up even though there was an ever increasing pile of tissues and assorted cleaning materials going into the bin, the pile of carbon and dirt building up on the rubberised table surface protector was also impressive. One problem I had noted was the Parker Hale MM1 moderator was stubborn to remove and it did take some effort to remove it, the threads were not too bad however the crown is well past its sell by date so I need to deal with that, a job for another day and the good news is it takes just a couple of minutes to remove the barrel. I am not sure what to do with the PH MM1, it is just about finished internally however it does seem to work reasonably well despite the occasional pop over on the first round with subsonic ammunition. I do have a couple of spare cans here that will fit however it would be nice to keep the MM1 that came with the rifle fitted as it is pleasantly old school despite being known in some circles as an air rifle moderator.