I have been meaning to write a few articles on the rifles I like, and preferably own, this one nearly ticks the boxes as it belongs to my wife however as the old saying goes: “What’s yours is mine, and what’s mine is my own“…

So here it is the dear old Krag-Jørgensen (pronounced  like you would cow but with a ‘r’ in it and Yorgensen) Wiki tells us: Rifle M/89 (Gevær M/89), stocked almost to the muzzle, no hand guard, straight bolt handle and an outer steel liner for the barrel. This weapon is typical of the period in having a long barrel and stock without pistol grip. Was originally issued without a safety catch; instead, a half-cock notch on the cocking piece/firing pin assembly served this purpose. In 1910, this weapon was modified by the addition of a manual safety, which was placed on the left side of the receiver just behind the closed bolt handle.

We were in Denmark start of September 2011 for a shooting holiday and heading up to the range on the first day we called into a gun shop called Korsholm, by UK standards this place is like a super market, a rather exclusively stocked super market at that. The good news is they sometimes sell 7,62×51 Milsurp at very good prices and anyway it is marked on the GPS…

Back to Korsholm. I was quite taken by a JagFeltSkydning Mauser chambered in 6,5Swede last time we called in so we popped back in to see if was still on the shelf, it was and it probably still is right now. I suddenly spotted an unusual looking rifle right in the corner of the rack and asked the sales person what it was and could I have a closer look. He obligingly removed it from the rack and handing it to me advised me it was something ‘old and Danish’ and maybe 8mm but he knew nothing else. Now we liked it, in fact we both liked it a lot and the price was keen as well, so Christel took some pictures and we left to research this ‘old Danish 8mm something’ rifle.

It turned out to be an M/89 Krag-Jørgensen and being Danish, unusual and a shite old military rifle it ticked all the boxes so we went back the next day and the salesman promptly dropped 25% off the already rather keen price. SOLD! So that was it, we had ourselves another rifle. Of course being in DK it involves some local paperwork and a variation added for the rifle on Christels Firearms Certificate but no matter it is paid for and we will call back and collect it at some point. Personally I am rather excited at having another Dane in the house, having a Danish wife, a dog from DK, a Schultz & Larsen and now the Krag.

Until it comes home some rather poor images will have to suffice. 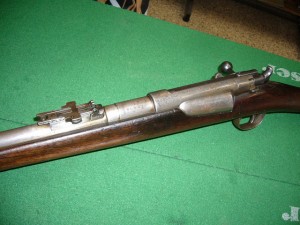 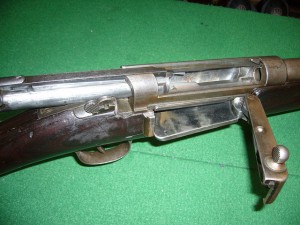 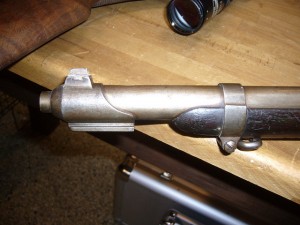 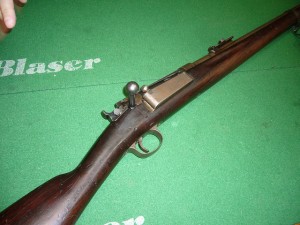 Interesting features include the side entry hinged magazine cover, load 5 rounds into the right, close the cover and the rounds are routed under the received and into the left hand side of the action which has a magazine cut off fitted. This M/98 also has the later 1910 fitted safety catch. The process of removing the bolt is unusual and the barrel itself is fitted with a tube sleeve as the earlier Mauser was. I wonder where that idea came from?

Approximately 60,000 M/98’s were built in Copenhagen and this one is marked Kobenhagen Gavaerfabriken. The kind hearted Germans liberated Denmark to save them from us Brits 9th April 1940 and even more kindly took over half the M/98’s for ‘safe keeping’ Now when you consider the humble SMLE was churned out to the tune of 17 million plus, the Danish Krag is quite unusual even in Denmark.

The original Krag-Jørgensen is Norwegian and the Danish M/98 is based on the original design but with some changes made. I will post more on the history of the rifle at a later date. 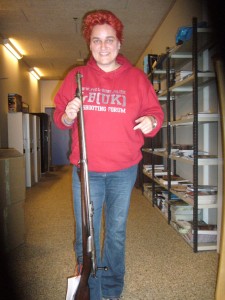 …and when it comes home, well I just hope it fits in the cabinet!