One thing I was unsure of was an odd plate on the rear upper section of the butt.

It looked like a base plate for a tangent sight however I could see no reason for the Snider having such a thing plus it was too far back so unless it was shot as a back gun, or perhaps field mortar would be a better description… Anyway the idea of a Snider for target shooting as a back gun seemed totally impractical and I was curious so I took it off today to see what was underneath.

Nothing! Well very little is a better description. The plate holds a small rectangle of brass in place.

My initial reaction is the plate was a suitable place to stamp an identification  number/name/unit on the rifle, certainly the military issue M/89 Krag Jørgensen some 30 ish years later was fitted with a small round brass plate for unit identification so this may be for the same purpose however this does seem like a rather elaborate method for such a basic rifle. The only other thing it could be is a location point for something and the brass section is merely there to fill in the hole until the ‘thing’ was fitted but somehow this does not really seem likely in my mind.

Hopefully someone who knows will be along in a bit.

Yes, Jørgen Balthasar Dalhoff is the chap that designed the wonderful curved rear sight for the Danish Snider and for this reason as any he is worthy of mention.

Well this is one for the ‘Tick list’ A Danish Infantry Snider by the look of it. Time for some research now. 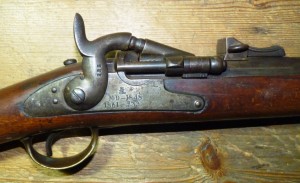 I just took a few minutes out to build a dummy round to confirm operation of the firing pin, this is it with a 5,56×45 NATO case alongside for scale. The case is around 18mmx28mm and the bullet is 17,5mm in diameter. I realised after I had machined this that the drawing I used was wrong however the case part is correct. I have always said beware a rifle that you can stick your finger down the end of, Christel can get her thumb in the end of this one… 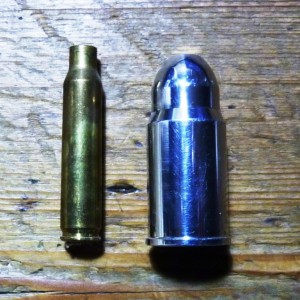 Right, this is a bit more as it should be. 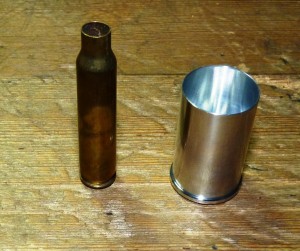 This dummy case was built from 6082 T6 however the final version will be brass, I can easily build a split clamp to hold the case in place to allow machining of the primer pocket. The original Danish Snider cartridge was a rim fire and all but impossible to find and certainly far too expensive to consider shooting so I will build new cases with an offset primer hole, because it is a rimfire the ‘primer’ will probably end up being a .22LR blank which is an unknown as they are hot to start off with and I am not sure of the pressure characteristics with black powder.